So here we are, two years later.  Unfortunately John could not come on this trip, so I have to take up the blogging stick.

Savannah and I left from Raleigh on June 28th, after a bit of panic at the ticket counter when her reservation couldn’t be found.  In London, we met up with more of our team, including my mom (Carol)  and Corrine, my long time friend and Savannah’s godmother.   Another 8 hour flight on Thursday and we were in Kenya.

We were met at the airport by Reegan, ZOE’s Chief Program Officer and Kenya Country Director, and Perpetual, ZOE’s Communication’s Director in Kenya.  By the time we got to our hotel and got our rooms it was after midnight.  A few of us had a quick snack and then headed to bed.

On Friday, our whole group of 12 loaded up into two vans for the trip from Nairobi to Maua.  It was a long journey, but it gave us some time to get acquainted and to see some of the country.  For lunch we stopped at Trout Tree, a fun restaurant that is basically a big, open treehouse with trout ponds.  They also have several families of Colobus monkeys who hang around and will steal food off your table if you’re not careful. 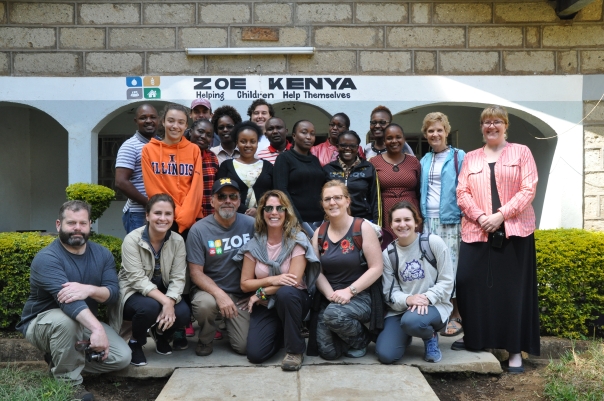 After our visit to the office we went on to meet a ZOE graduates working group.  This group formed in 2012 and graduated in 2014.  They still meet weekly as a group, although some of their members have moved away for jobs or to get married.

After some singing and dancing, the Chairman of the group, Moses, started us out with a prayer and the story of Tobias.  He reminded us that whatever we want from God, persist in asking and God will come to you.  God has the answers to all the challenges we face.

Then some of the group members shared their testimonies with us.

Moses is a carpenter and has his own farm and bota bota (motorbike).  He has built 5 houses for other children in the program and is committed to training 5 children in carpentry as a way to payback what was given to him through ZOE.  He has two siblings.  One drives Moses’ bota bota as a taxi.  Moses is paying for the other to do driver training.

Irene told us how when they joined ZOE, they were taught health and hygiene, how to have good food and how to keep their house clean.  Before ZOE, she and her 7 siblings didn’t have blankets or a good house and didn’t wear shoes.  They had all dropped out of school.  Now she sells eggs and porridge and has goats and chickens.  She has sent her siblings back to school and has built a house for her family.

Joseph is the group secretary.  He supports his 6 siblings and his mom.  He trained as a barber and also uses his barber shop as a place to sell tea in the evenings and to charge phones.  He trains other ZOE members for free.  He has plans to extend his shop for a salon.  Through the money he earns, he is sending two of his siblings to school (9th and 11th grade) and is prepared to help them go to university.

Allison and her three siblings had no one to support them.  They had no say in their community, but their life and family have been changed by ZOE.  Her siblings are back in school (1st, 5th and 7th grades), she has opened a small, clean restaurant, and she has bought chickens and goats.  She is now a part of her community.

Martin is a farmer and an entrepreneur.  He learned farming in his first month in ZOE and was given planting seed which he was able to turn into a harvest of 100kg of beans.  He used the proceeds to feed his family and with what was left he started a nursery to raise collard green seedlings.  He sold the seedlings for $150 and was able to buy a digital camera, which he used to take pictures of people.  He invested the money he earned selling photos into his nursery business and at the next harvest earned enough money to buy a laptop which he used to process his photos.  By his third harvest, he bought a printer so he could print the photos himself.  He is now a photographer and videographer for ceremonies.  With the money he’s earned, he was able to buy and plant more land, to build a large house for his family and to put his three siblings through school.  He is now saving to buy a bota bota to carry his crops from his farm to his store.  Martin also serves as the pastor and spiritual advisor of the group.

Finally, Sabina, the group’s mentor shared with us.  She told us how little these kids had when she met them and how proud she is of all they’ve accomplished.  They are like her own children, and you could see her joy in them.

After this time of sharing, the group fed us a lunch of millet porridge, baked sweet potatoes and bananas.  Afterwards, some of the group played soccer with kids from the area, while others taught a group of kids how to play duck, duck, goose.

On our way back to Maua and our hotel, we stopped and visited Joseph’s barber shop and Micheck’s store.  No one was up for a shave, but we did buy cocoa and tea from Micheck.

It was a full, but rewarding day.

Tomorrow we will go to the St. Joseph’s Kenya Methodist Church and then meet more graduates in the afternoon.