Monday morning, half of our group (Jeannne Marie, Anne, Corinne, Savannah, Carol and Erika) went with two ZOE facilitators (Mercy and Caroline) to visit Action Kigucwa working group. After our trip to Kenya in 2015, I was moved to crowdfund one of the un-partnered groups in Kenya and this was the group I was partnered with. They are now in their third year of the program and are set to graduate in December. 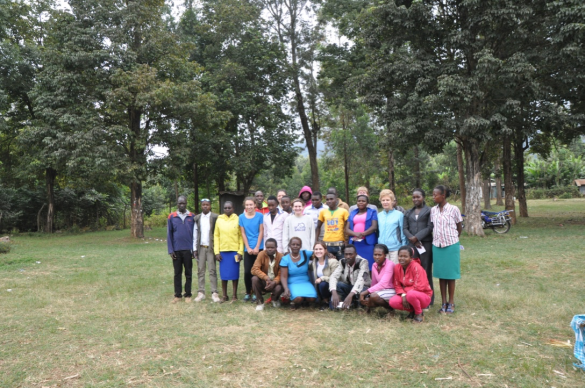 These children live and work in a village about an hour’s drive from Maua, further up in the mountains in an area filled with tea plantations. When we were here two years ago, the road was paved about halfway to their village, but now the main road is paved all the way which made for a much smoother ride. Unfortunately the morning was very foggy, and visibility was low. Our time with the group was quite chilly, not at all what one associates with Africa.

When we reached the place where the group holds their weekly meetings, about half of the group greeted us with singing and dancing. We then sat down and chatted while waiting for the rest of the group to join us. When they did, we were told that they were going to serve breakfast as most of the group had walked a long way. They served us hard boiled eggs from their chickens (provided by Bonface), bananas from their fields (provided by Catherine and Justice) and milk tea (with milk from Bonface’s cow). It was delicious and even more so because we knew that everything came from the fruits of their labor. These children, who three years ago may have been lucky to have one meal a day were generously sharing a lovely, well balanced breakfast with us. Amazing.

While we ate we asked a few questions. They told us that before they joined ZOE, their diets consisted of beans and maize, boiled with no spices. Boiled plantains and boiled cassava. Not only did they not have fruit, vegetables or meat, but the often were lucky to have one meal a day.

When asked about what they like to do for fun, they told us they play football (soccer) and volleyball and many like to perform in church skits.

Catherine, the group secretary, then shared the group report:

ZOE helped Catherine start a kiosk. Every week she saves 200KS ($2). After the first year, she was able to enroll for training in tailoring. ZOE initially supported her brother with fees, but as her business grew, she was able to assist him and he has finished 12th grade and is set to go to university.

Pamela had many challenges before ZOE but now she realizes that nothing is impossible with God. She had a passion for farming and land inherited from her parents, but didn’t have the knowledge or money to get started. With ZOE’s training, she planted maize and had a good first harvest which she was able to store and sell when prices went up. She then had the opportunity to go for training in hairdressing and was able to start a salon. Savings from her salon business allowed her to hire more land and increase her farming. She enrolled her siblings back in school (12th and 8th grades) and the piglets she raises pay for uniforms and school fees. She was also able to support her brother through the process/celebration of passing from childhood to adulthood and is now building him a house. Before ZOE she was an outcast in her community, but now she is invited for parties, weddings and fundraisings.

Bonface was adopted into the group after its formation. He has one brother who is in 7th grade. He was initially supported with planting seeds. As he also knew how to do barbering, he was supported with a start-up kit. His business was successful, and he was able to join savings groups in the community. He has learned about loaning money and profiting from collecting interest and has now started his own loan business. From his earnings, Boniface has been able to build his own shop so he no longer has to rent. He has also built a home. His other businesses include renting coffee and tea plantations and harvesting the crops and fish farming. We were able to see his fish pond where he raises tilapia to sell to restaurants in Maua and Meru.

Philip had never worn shoes before he joined ZOE only bedroom slippers (<$0.50). Now he is able to interact with people who have been to school and are learned. There is nothing they use that he cannot afford. He is now able to interact with the community because he is no longer shy and he has money so he is not ashamed. Through ZOE he has learned how to live in Christ. Initially he started a kiosk, where he earned ~$3 a day. He used the profits to act as a broker, buying and selling chickens. Some of his profits went in the bank and some went into village saving. He supports his cousins and extended family. He was able to fulfill one of his dreams when he bought a bota bota, which he uses as a taxi. He was also able to buy a small piece of land.

Alex did not know about God or about personal grooming before he joined ZOE. ZOE provided him with carpentry training and now he is able to support some of his cousins whose mother left them, paying for school fees and buying their clothes. He has also been able to repair his house. Alex rents tea plantations and he was able to buy a cow with the proceeds he made from the harvest.

Lack didn’t know anything about God before ZOE and he never had a blanket. Through ZOE he earned a blankets and mosquito nets. He came to ZOE with barbering skills, so the group provided him with a start-up kit. He used the profits from his kinyozi (barber shop) to support his siblings in school. In addition, the group helped send one brother, now in 12th grade, to high school. Lack also saved money to purchase a goat which he later sold to build a house.

Before ZOE, Hellen got a job as a housegirl to support her siblings. She and a houseboy got into an arguement and he cut off her left hand. Her employers chased her off, telling her to go home. When she got back to her home though, no one would take her to the hospital so she had to beg for the money to pay the doctors. A year later she was asked to join ZOE. She started a business selling boiled eggs, and is able to support her siblings. She has been able to expand their home and now they have beds to sleep in. She also has bought two sheep.

Eunice says that now her house is so clean that even rich people can visit. She has a business selling clothes and the profits from her business support her sister in high school. She also is able to by supplies and uniforms for her younger siblings. She has received training in hairdressing and now employs someone in her salon.

Linda didn’t know much about God before ZOE, but now she is saved. She realized she couldn’t do much without God based on the teachings of ZOE. She has a business selling plastics (buckets, mugs, cookware). Through her savings she enrolled herself in hairstyling training. Now she can afford more expensive clothes and is so respected she has been invited to attend a graduation party in Nairobi. She wants to share her success by supporting other children.

Eunice (20) couldn’t dress well, couldn’t attend community functions and didn’t know how to wash her clothes. Her neighbors despised her and her siblings because they often didn’t have food and had to beg. She was able to learn hairstyling from the village and now has a successful salon. She has bought a cow with her savings and trains others in the community, especially orphans.

Edna was supported with training and start-up funds and runs a salon. She supports her siblings in school. She has joined a village savings and loan and saves $5 a week. She has bought 3 goats and is planning to install electricity in her home.

Ruth is the Mentor for Action Kigucwa. She said that before ZOE, the children were despised by the community. Now the community looks at them in a different way. There is a noticeable positive change in them and their families now that they have started businesses. Now they are invited to events in the community.

At the end of the meeting, the group provided a snack of boiled corn, also from their garden. Corinne handed out postcards to each member from Portland (her hometown). Then lots of pictures were taken, especially selfies with the younger ladies.

The meeting was held very close to Bonface’s shop and home, so we walked over and visited. Bonface’s barber shop was spacious and nice. It was obvious he was proud of building and owning his own shop. Once he joined ZOE, started his first shop and was earning money, his aunt invited him and his brother to build a shop and home on her land, so they share a compound. We visited his cow and his tilapia pond, and he gave us sugar cane which we all tried, as well as bringing some back to share with the group. 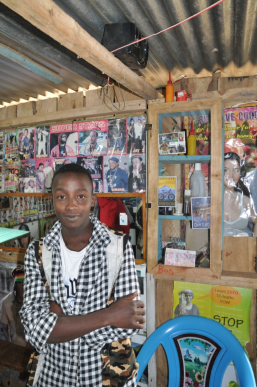 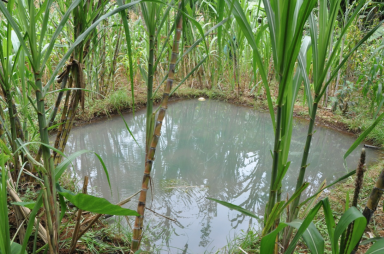 Next we visited Pamela’s shop and she braided Savannah’s hair. She had some trouble with it because it is so different from what she’s used to, so Linda helped out.

We also stopped by Eunice’s kiosk where she sells clothing.

Finally we went to the other Eunice’s salon where Anne and I had our hair done. 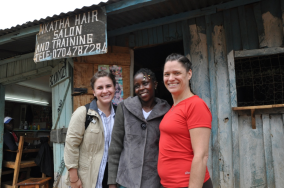 On our way out of town, we stopped by Phillip’s kiosk and bought some tea. Here he is, outside his shop on his bota bota.

We piled back in the van for the drive back to Maua. The fog had cleared and the views were magnificent.

We even stopped along the way and had a picnic of the lunch the hotel had packed for us.

It was a long but very fulfilling day. After dinner, the full group gathered to share our experiences.